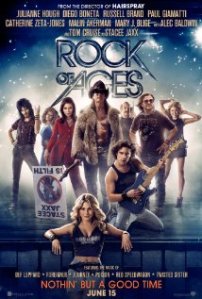 As a child of the ’80s and as a teenager who wanted to hit the Sunset Strip and become a rock star (but my parents wouldn’t let me), I eagerly anticipated the release of Rock of Ages. I saw the Tony Award nominated musical on Broadway, and was impressed with the seamless way classic rock anthems were worked into a true hair metal storyline as traditional stage rules were forsaken (for instance, breaking the fourth wall) for comedic purposes.

After reading several critic and user reviews mostly bashing the movie, recognizing that musicals transformed on screen are typically disappointing, and watching box offices tallies certify Rock of Ages as a bomb, I had low expectations going into the movie. Perhaps it’s because of these low expectations that I actually enjoyed Rock of Ages.

You will know if you will enjoy Rock of Ages at the opening sequence as Dancing With The Stars alum Julianna Hough — playing Sherrie Christian, an aspiring singer from Oklahoma who hits Hollywood seeking fame — breaks out into Sister Christian on the bus ride to Los Angeles as fellow passengers sing backup. Just like the music and style from the era, this scene is pure cheese, as is the rest of the movie. If the first five minutes are too cheesy to you, then you will not enjoy the rest of the movie. However, if you can accept the garish nature of the scene and find yourself internally singing along, then you’ll likely enjoy the flick.

The story follows Christian and fellow aspiring singer Drew Boley (played by newcomer Diego Boneta) as they chase their rock and roll dreams while working at the fictionally legendary Bourbon Room club on the famed Sunset Strip. Meanwhile, the club, owned by Dennis Dupree and managed by Lonny (comic relief roles played by Alec Baldwin and Russell Brand, respectively), is under attack by the mayor and his wife (played by Bryan Cranston and and Catherine Zeta-Jones) in an attempt to clean up the strip and save children from the evils of rock music. At the center of their spite is mega-rock star diva Stacey Jaxx, played flawlessly by Tom Cruise.

The movie takes some liberties with the musical’s storyline, but for the most part is a fair representation. The introduction of Zeta-Jones’ character as the mayor’s wife was the biggest deviation from the musical, rendering Cranston’s mayoral character useless in the movie. For the most part, the star-studded cast pulls off solid and humorous performances, especially Tom Cruise as the bigger-than-life rock god. Baldwin and Brand form a humorous team in their ridiculous outfits. And Paul Giametti and Mary J. Blige play their roles as a sleazy rock manager and strip club owner surprisingly well. The major disappointment was Zeta-Jones, who is ridiculously over-the-top even in a movie where everything is big.

The music is phenomenal — but only if you enjoy songs from the hair metal/arena rock era. It was surprising to see the actors, mostly not known for their singing, pull off strong performances of 80s rock anthems, particularly Cruise’s rendition of Bon Jovi’s “Wanted Dead or Alive” and Def Leppard’s “Pour Some Sugar On Me,” Baldwin and Brand’s humorous duet of REO Speedwagon’s “I Can’t Fight This Feeling,” and the many duets by Boneta and Hough, such as a heartfelt mash-up of Extreme’s “More Than Words” and Warrant’s “Heaven.” And the most of the cast joins in on performances of Poison’s “Nothing But A Good Time” and Journey’s “Don’t Stop Believing.”

The Bourbon Room is introduced in an ensemble performance of Poison’s “Nothing But A Good Time.” Featuring big rock, big hair and a big cast, for those who are fans of this era of excess, Rock of Ages is indeed a good time, but nothing else.